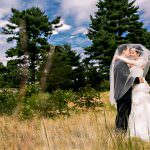 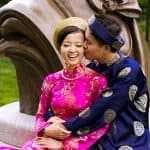 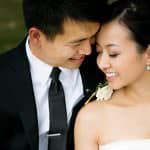 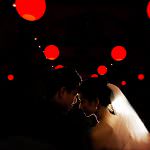 If someone told me that I would marry the boy I had a crush on in 7th grade, I’d vomit.

When Quang and Phison were in the 7th grade, they were just friends or sorta-friends, because way back then, being friends with boys was weird.  However, Quang had a massive crush on this girl, pursued her, and got rejected (gently – Phison would add).  Let’s fast forward about seven years.   Quang’s persistence finally pays off and they go on their first date on a chilly snowy day.  Fast forward a few more years, throw in some long distance challenges, and Quang decides that he’s going to propose… (as cheesey as it sounds) to his one and only love.

On the day of the proposal, Quang envisions some high tech specific effects.  He wanted to recreate snow – with some fake snow flakes and a fan.  Though the projected ended in a “Phison, keep your eyes closed.”  *pause* and then a “Oh no…!  I faiiiiiil….”, she still said yes.  🙂

They had a traditional Vietnamese wedding ceremony, first at her home and then at his.  The night ended in a beautiful reception at Kowloon in Saugus!